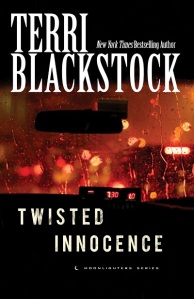 I really enjoyed Twisted Innocence. It is the third book in a series, however, I had not read the first two books and I followed the storyline just fine. The author did a good job of catching me up to what had been going on in the previous books. I do think that my reading enjoyment would have been even greater had I read the whole series, but I still liked this book very much.

I really liked Holly Cramer. She has turned her life around for the sake of her new baby. She no longer runs with a wild crowd or parties her days and nights away. She is dedicated to this sweet baby girl and to doing the best she can for her. I sometimes found myself frustrated with Holly’s siblings, because they doubted that she had really changed her ways. But, truly, their reluctance to believe that she wasn’t going to fall back into her previous behavior makes complete sense. These siblings have known her the longest. The fact that she has made a permanent change is something hard to believe when they have seen her slip so many times before.

There is a continuing story throughout the three books that deals with a powerful drug lord. I did not have any trouble following this plot. Holly’s family and other people close to their family have been brutally targeted and have had many problems because of this man. The continuing battle against his evil hold on their city was thrilling.

This book flowed very smoothly and was a quick read for me. I enjoyed the plot and the characters and definitely recommend it for fans of suspense and romantic suspense.
(4 stars)

I received a complimentary copy of this book from the publisher, through Litfuse Publicity, in exchange for an honest review.

Holly Cramer’s past choices have finally caught up to her, but she never expected them to endanger her baby.

Though Holly’s stumbled through most of her adult life as a party girl, she longs to live a more stable life for her daughter. Then police show up to question her about the whereabouts of Creed Kershaw, Lily’s father. She has kept his identity a secret from friends and family—she never even told him about the pregnancy. Now he’s a person of interest in a drug-related murder case.

Determined to keep him out of their lives and turn him over to police, Holly uses her private investigating skills to search for him. But her bravado backfires when he turns the tables and takes her and the baby hostage. As desperate hours tick by, Holly realizes his connection to Leonard Miller-the man who has gunned down several members of her family. Creed claims he’s innocent and that Miller is after him too. His gentleness with Lily moves her, but she can’t trust a man who has held her at gunpoint . . . even if he reminds her so much of herself.

Dangers old and new threaten Holly and her baby, and lives are demanded as sacrifices for love. Through a complex web of mistakes and regret, redemption is the one hope Holly has left to hold on to.

has sold over six million books worldwide and is a New York Times bestselling author. She is the award-winning author of “Intervention,” “Vicious Cycle,” and “Downfall,” as well as such series as Cape Refuge, Newpointe 911, the SunCoast Chronicles, Restoration, and Moonlighters.
Find Terri online: website, Facebook, Twitter
Landing page:
http://litfusegroup.com/author/tblackstock

In Terri Blackstock’s third and final book in her Moonlighters series, Twisted Innocence, readers are in for a story of suspense and redemption. Dangers old and new threaten Holly and her baby, and lives are demanded as sacrifices for love. Through a complex web of mistakes and regret, redemption is the one hope Holly has left to hold on to.

One grand prize winner will receive:

Enter today by clicking the icon below. But hurry, the giveaway ends on March 8th. Winner will be announced March 9th on the Litfuse blog.

As a homeschooling mom and avid reader, I get great joy through reading and reviewing books. I focus my reading and my reviews on Christian fiction, primarily Christian romantic fiction. I also review sweet, clean fiction. I hope you will find my reviews helpful in your decisions on what books to read.
View all posts by Brittany →
This entry was posted in Uncategorized and tagged Author, Book, book review, christian fiction, contemporary, contest, giveaway, God, literature, Litfuse Publicity, Nook, romance, suspense, Twisted Innocence. Bookmark the permalink.