Review: In Spite of Ourselves by Jennifer Rodewald 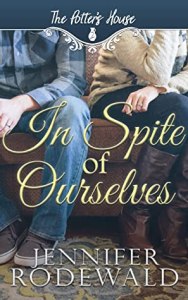 Here’s a novel that has zoomed up to take its place near the top of my favorites list! In Spite of Ourselves really showcases God’s love for us, not only in the way that God can work through any situation, but also in the way that Jackson ended up being called to love his wife, even when she was being decidedly unlovable.

This moving story grabbed hold of me and didn’t let go. Mackenzie is perhaps one of the most emotionally messed up characters that I have ever read about. Her mother really did a number on her growing up and the way Mackenzie views men and their motives is heavily influenced by what she was taught. But Jackson keeps surprising her and makes her question all that her mother has told her.

My heart broke for Jackson over and over. He was a character that I couldn’t help but love right from the start. He has regrets and things that bother him. He tries to put on a brave face to the world and is known to his family as quite the prankster. However, I quickly realized what a deep, loving, sensitive guy he was and felt for him as he tried to show Mackenzie how important she was to him. I truly loved this story!

Who could build a life on such a monumental mistake?

Jackson Murphy: family prankster, class clown… and now, smack in the middle of a Vegas-sized mess. All he’d wanted was to qualify for the Boston Marathon. After failing that goal, he slipped into a deep, sulking valley, only to emerge from it with a much bigger problem. He’s married. To a complete stranger! Forget making a world-class marathon so that his family will believe that (1) he’s capable of being grown up and serious on occasion and (2) he doesn’t need the ongoing pity about his brother and a certain ex-girlfriend.

Now? Now he has no idea what to do.

Mackenzie Murphy: independent woman and excellent student—but not a med student. Because those pesky MCATs were H-A-R-D. She doesn’t particularly mind that much, seeing as she’s never really wanted to be a doctor, but her mother will be…uh, displeased. Exceptionally. That’s nothing, however, compared to how Mother will respond if she finds out what else happened in Vegas.

Mackenzie wants out. Jackson wants a chance. Neither of them is prepared for what’s coming. Caught in the middle of a disaster that keeps getting bigger, they hardly dare ask: Can God take their monumental mistake and turn it into a beautiful life?

In Spite of Ourselves, Book 13 in The Potter’s House Books Series Two, is an uplifting and inspiring story of hope, redemption and second chances. It is also book Two in Jennifer Rodewald’s Murphy Brother Stories (book One is Always You). Grab your copy and be encouraged today.

Jennifer Rodewald is a Christian author of fiction who is passionate about the Word of God and the power of story. Four kids and her own personal superman make her home in southwestern Nebraska delightfully chaotic.

Born in Colorado, she experienced both the seclusion of rugged mountain living and the busy streets of a Denver suburb during her growing up years. Somewhere in the middle of college, she married a Husker and found her way back to the quiet lifestyle of a rural area, which suits just fine.

Blessed with a robust curiosity, Jen loves to research. Whether she’s investigating the history of a given area, the biography of a Christian icon, or how nature declares the glory of God, her daily goal is to learn something new. Aiming to live with boundless enthusiasm, her creed is vision, pursuit, and excellence, and she incorporates that pursuit as a Christian writer.

Jen lives and writes in a lovely speck of a town where she watches with amazement while her children grow up way too fast, gardens, and marvels at God’s mighty hand in everyday life.

As a homeschooling mom and avid reader, I get great joy through reading and reviewing books. I focus my reading and my reviews on Christian fiction, primarily Christian romantic fiction. I also review sweet, clean fiction. I hope you will find my reviews helpful in your decisions on what books to read.
View all posts by Brittany →
This entry was posted in book, book review, Christian Fiction, Uncategorized and tagged Author, Book, book review, christian fiction, contemporary, In Spite of Ourselves, Jennifer Rodewald, Murphy Brothers, Potter's House, romance. Bookmark the permalink.